Writing about “Dojo Hopping” and training at other schools go me to thinking about some places I’ve trained.  Now I know that some occupations train in different environments, police officers, fire fighters, military etc. etc. come to mind.  But often times in the martial arts we think of training only in the confines of the four walls of the dojo.  However one of the things that impressed me about the Filipino martial arts was the emphasis on environmental training which has led to some fun training in some different places. 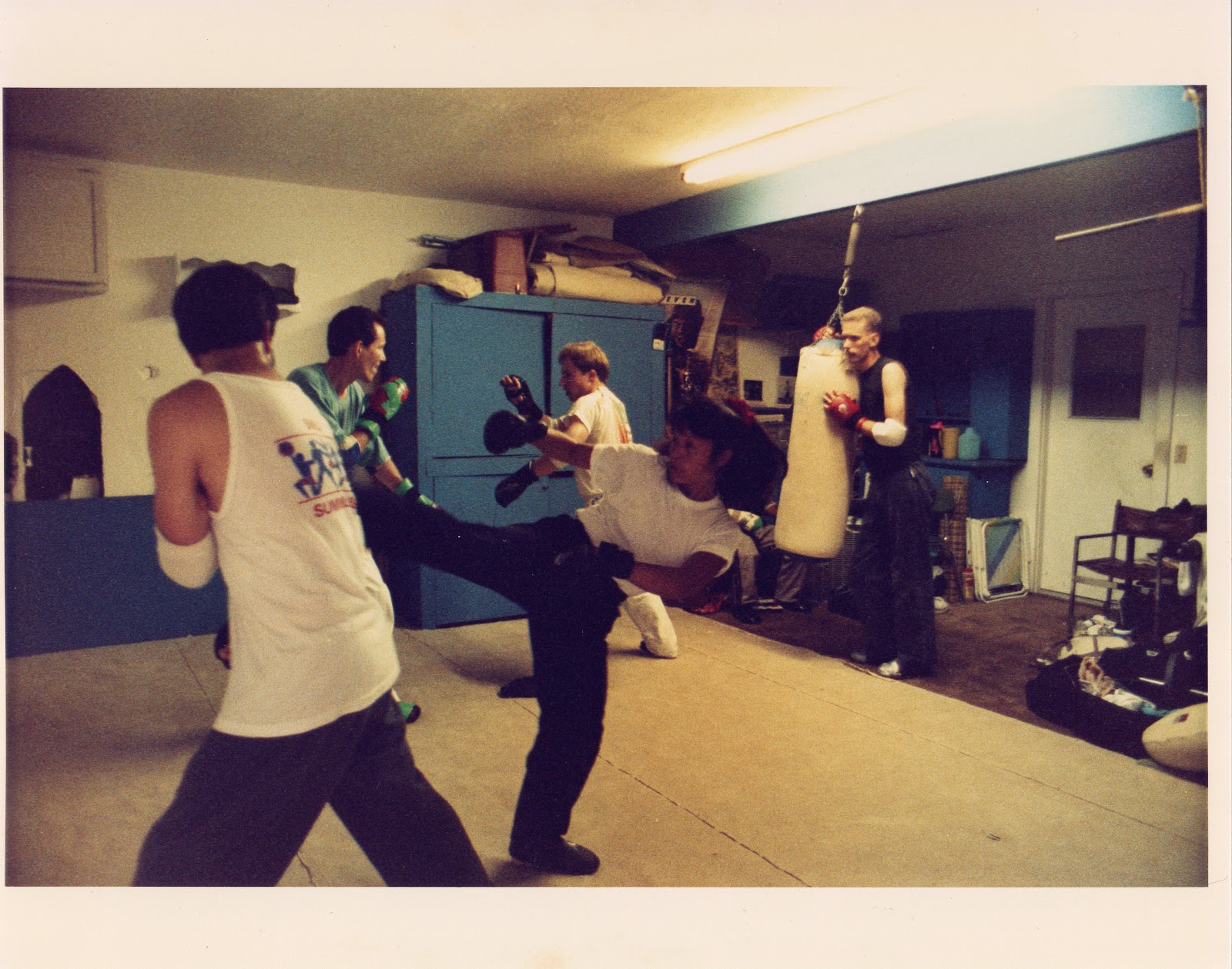 Of course my favorite place to train was at my sensei’s dojo which was at his house where he converted his garage into the dojo   When I trained there, there was no heat except for venting the dryer into it during the winter, no AC in the summer except for a box fan.  In the   Over the years it has changed with plywood being put up on the walls instead of sheet rock.  I think a small Heat/AC vent has been added, and of course the old cabinets were removed to give students a little more room.  But it was here that I learn to fight and not run away because frankly there is no place to hide, his students still learn that lesson today in the same small space.
old days there were holes in the walls where we got kicked or thrown up against and the mat area was smaller than a standard sparring ring.

In the late 80’s-early 90’s we had kobudo practice in two buildings in downtown Dallas.  One of the instructors knew someone who leased office space for the buildings and since the rooms were available we got to use them.  One of them the Rotunda, was a round class building on street level across from a church.  As we practiced in full uniform practicing boken, jo, nunchaku, kama and sai we got plenty of strange looks from the passerby and the wedding parties at the church.

In 1998 GM Ernesto Presas and Jon Jon (his son) came to Dallas and Hock had a seminar for him at some place like the Dallas Gun Club.  It wasn’t in a used part of the building rather it was in an unfinished space.  What I remember most about the place was the AC unit filter was all clogged with junk like you see on a TV shows such as Bones.  I can see Hoddgins now exclaiming how he found particulates on the filter that caused the person to have lung cancer or something.  But I digress.  It was gross; we finally took the filter out so the AC would cool the room down.  The same layer of dust and particulates that was on the AC filter coated everything; the floor, you as you rolled on the floor, your sweat stained clothes as you got up from the hard cement floor, etc. etc.  Hands down the dirtiest place I have ever trained, it made you want to get a shower for two days afterwards.  I found this picture yesterday and it still made me feeling grimy 15 years later.

In 1999 I went to a Master’s seminar in Stockton CA to train with the Bahalana club, the Serrada Escrima club and the Descreudas Escrima club in their systems of the Filipino martial arts.  My first stop was at GM Leo Giron’s school that was at his house.  There his students trained in the backyard and under the house.  I remember walking into the backyard and seeing all of these students of his and thinking I’m going to die.  Seriously I was stepping out of my element by traveling to California and training with people I had no clue about, but I really had a blast.  The guys who put on the seminar (the hosts) were great, even having a big pig roast in a park for us.  Overall they were extremely warm and welcoming.

Vincent Cabales’s school was held I believe in a Rec. center and in a small store front which is where we trained.  The room wasn’t much bigger than where I currently teach at the Roanoke Recreation Center, it was pretty tight with no mats. 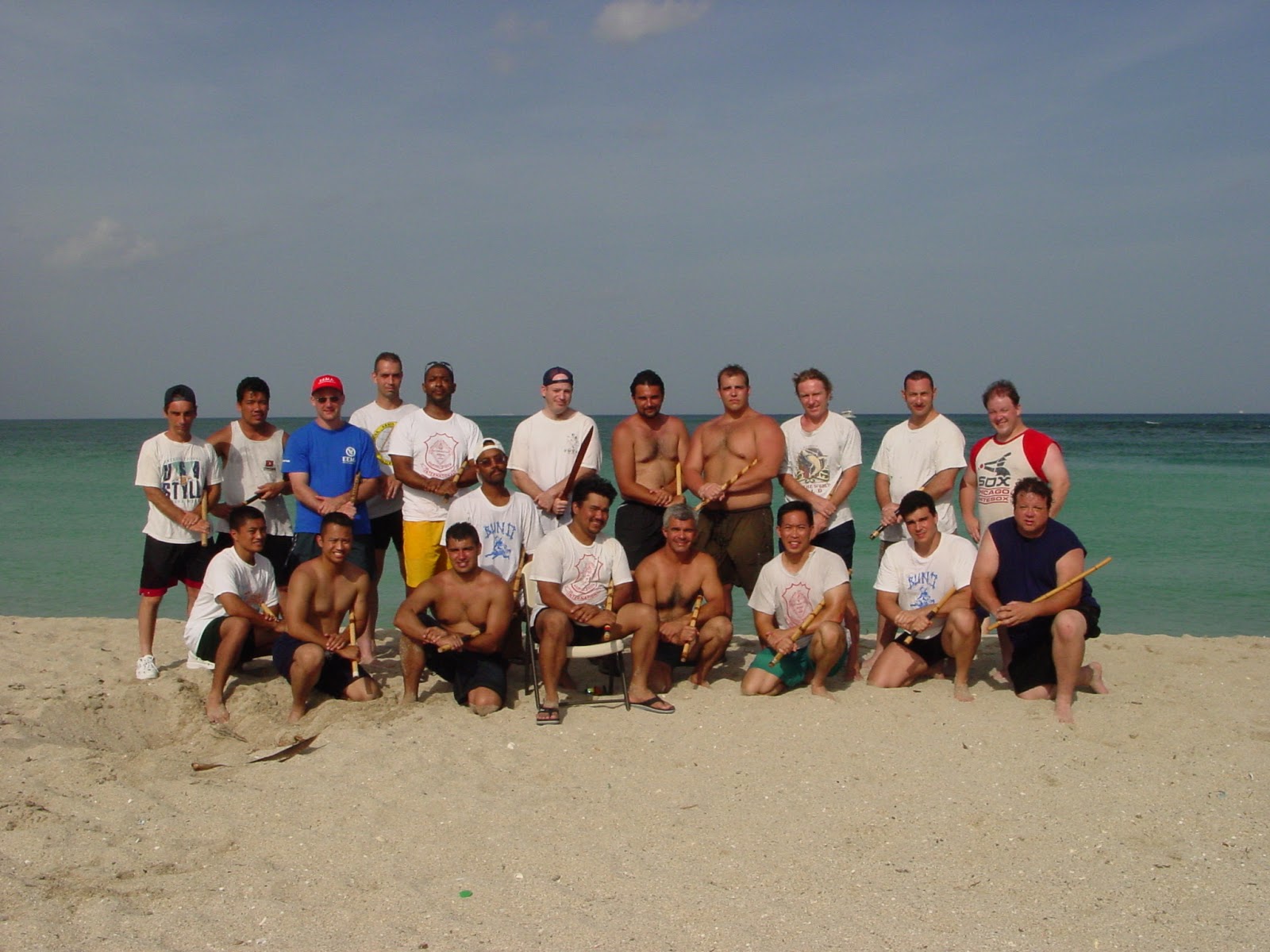 In 2000 I went to the Garimot Escrima summer camp where we trained in a 5 star hotel ballroom.  Gat Puno Abon “Garimot” Baet  (the host instructor) worked at the hotel so we trained in this huge room.  However the fun part was training outdoors on the back terraces where we did knife defense on the back steps, although we were part of the way through the training session when we had to stop because we were disturbing the concentration of the golfers below us.  On the last full training day we went to the beach were we sparred and wrestled in the sand and then practiced stick drills in the ocean.  As I remember it we were up to our waists in water getting pushed around by the waves as we did drills similar to high box sumbrada.

Occasionally at seminars there is so much participation you have to move outside and train.  Once at a Raffy Pauban seminar at Guro John Bain’s school in Plano we did double baston training in the parking lot.  But the most fun was at one of Hock’s camps where we did disarming and combative type drills outside in the parking lock because we needed room inside.

Hotel and dorms rooms were always a favorite place to train after hours at seminars.  As were training outside at camps or in neighborhood parks such as this past New Year’s Eve (when I had drive bys by Roanoke’s police checking me out).  I’ve even worked with people in training rooms at work on our lunch breaks.  You can always find a place to train if you want to, even when your dojo is closed.
Posted by hidden sword at 3:15 PM

Email ThisBlogThis!Share to TwitterShare to FacebookShare to Pinterest
Labels: Training