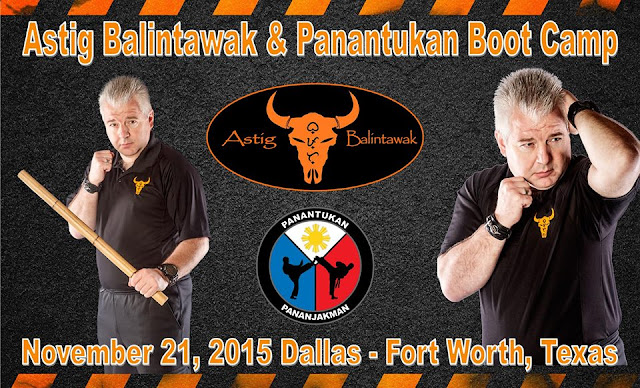 Hidden Sword Martial Arts along with Mid Cities Arnis will be co-hosting Datu Tim Hartman for a special Astig Balintawak and Panantukan Boot Camp this weekend.

Datu Hartman was a student of the late GM Remy and GM Ernesto Presas and he was also a private student of the late GM Ted Buot who was a Balinwatak instructor under the late GM Anciong Bacon the founder of Balintawak.   GM Remy Presas also studied Balintawak early in his arnis training and  Balintawak was one of the root styles that influenced GM Remy's creation of Modern Arnis.   All this to say that Datu Hartman brings a unquie prespective to our training and we are happy to have him come to our school.

GM Buot taught Balintawak the old school way that Bacon taught in the Philippines which was better suited for one on one training with the goal to develop proper body mechanics, power and speed needed for both stick fighting and for empty hand fighting.

I've known Datu Hartman for 15+ years now and I have enjoyed his teaching sessions at several seminars I've attended.   He is a good instructor and a teacher and we look forward to his visit.

Don't miss this opportunity to train with him.

I hope to see you there.
Posted by hidden sword at 9:31 PM